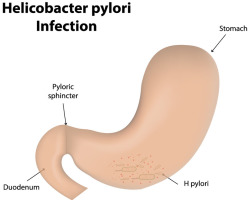 This unusual name identifies a specific bacteria that can cause infection of the stomach. This infection can contribute to the development of diseases, such as dyspepsia (heartburn, bloating and nausea), gastritis (inflammation of the stomach), and ulcers in the stomach and duodenum. It will be useful to know some things about the upper digestive tract to understand how and where Helicobacter pylori infection can occur.

It is known that alcohol, aspirin, and arthritis drugs such as ibuprofen can disrupt the protective mucous layer. This allows the strong stomach acid to injure underlying stomach cells. In some people, corticosteroids, smoking, and stress appear to contribute in some way. Until the mid 1980s, it was felt that one or more of these factors working together led to the development of gastritis and ulcers. Since that time, evidence has been mounting that Helicobacter pylori (H. pylori) has a major role in causing these diseases. Compelling research now supports Helicobacter pylori as a cause of many ulcers and gastritis. 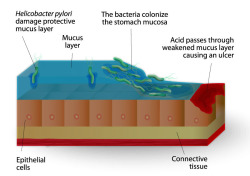 H. pylori is a fragile bacteria that has found an ideal home in the protective mucous layer of the stomach. These bacteria have long threads protruding from them that attach to the underlying stomach cells. The mucous layer that protects the stomach cells from acid also protects H. pylori. These bacteria do not actually invade the stomach cells as certain other bacteria can. The infection, however, is very real and it does cause the body to react. Infection-fighting white blood cells move into the area, and the body even develops H. pylori antibodies in the blood.

H. pylori infection probably occurs when an individual swallows the bacteria in food, fluid, or perhaps from contaminated utensils. The infection is likely one of the most common worldwide. The rate of infection increases with age, so it is found more often in older people. It also occurs frequently in young people in the developing countries of the world, since the infection tends to be more common where sanitation is poor or living quarters are cramped. In many cases it does not produce symptoms. In other words, the infection can occur without the person knowing it. The infection remains localized to the stomach, and probably persists unless specific treatment is given.

How is H. pylori Infection Diagnosed?

There are currently four ways to diagnose H. pylori infection. During endoscopy (a visual exam of the stomach through a thin, lighted, flexible tube), the physician can remove small bits of tissue through the tube. The tissue is then tested for the bacteria. A breath test is also available. In this test, a substance called urea is given by mouth. A strong enzyme in the bacteria breaks down the urea into carbon dioxide, which is then exhaled and can be measured. There is also a blood test that measures the protein antibodies against these bacteria that are present in the blood. This antibody can mean the infection is present, or that it was present in the past and is now cleared. In other words, a person can have a positive antibody blood test but no infection.  Finally, there is a stool test that measures a protein that is shed by the bacteria.

H. pylori symptoms can include abdominal discomfort, bloating, nausea and perhaps vomiting. These symptoms, however, are not specific to H. pylori.  For example, the person may also have symptoms that suggest ulcers — burning or pain in the upper abdomen, usually occurring about an hour or so after meals or even during the night. The symptoms may be relieved temporarily by antacids, milk, or medications that reduce stomach acidity. Yet, the physician does not find an ulcer when the patient is tested by x-ray or endoscopy. When H. pylori is found in the stomach, it is tempting to believe that it is the cause of the symptoms, although this connection is not always clear cut. The physician will usually prescribe antibiotic therapy to see if clearing the infection relieves symptoms.

H. pylori infection is found in 60 to 80 percent of the those with stomach ulcers. H. pylori most likely weakens the protective mucous layer of the stomach. This allows acid to seep in and injure the underlying stomach cells. However, there is still a great deal of research to be done to unravel this relationship.  For example, only about 20% of patients infected with H. pylori will develop ulcers.

These two types of cancer are now known to be related to H. pylori bacteria. This does not mean that all people with H. pylori infection will develop cancer; in fact, very few do. However, it is likely that if the infection is present for a long time, perhaps from childhood, these cancers may then develop. This is another reason why it is important to treat H. pylori infection.

When is Treatment Necessary?

Since the infection is so common, it is sometimes recommended that no treatment be given when there are no symptoms. However, these recommendations may change as more research develops. Increasingly, physicians are treating the acute ulcer with acid-reducing medicines and treating the infection with antibiotics. Interestingly, one of these antibiotics is a bismuth compound that is available over-the- counter as Pepto-Bismol. It is also available as a generic drug called bismuth subsalicylate. The bismuth part of the medicine actually kills the bacteria. However, do not go to the drugstore and purchase a bottle of Pepto-Bismol, expecting this alone to cure the infection. H. pylori is buried deep in the stomach mucous, so it is difficult to get rid of this infection. Several antibiotic drugs are always used together to prevent the bacteria from developing resistance to any one of them. Current medical studies are being done to develop easier treatment programs for this difficult infection.

H. pylori is a very common infection of the stomach. It may be the most common infection in the world. It is now clear that the infection is directly related to the development of stomach and duodenal ulcers, and it is likely that it may be related to cancers involving the stomach. There are several diagnostic tests available, and effective treatment can prevent the recurrence of ulcers and perhaps the development of cancer.