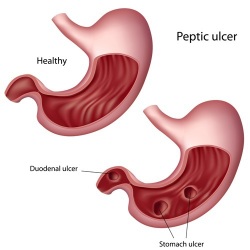 Peptic ulcer disease (PUD) is a common ailment, affecting many people. The causes of PUD have gradually become clear. With this understanding have come new and better ways to treat ulcers and even cure them.

Anatomy and Function of the Stomach

The stomach produces a very strong acid. This acid helps digest and break down food before it enters the small intestine (duodenum). The lining of the stomach is covered by a thick protective mucous layer which prevents the acid from injuring the wall of the stomach.

This funny-sounding name identifies the basic cause of most peptic ulcers, excluding those caused by aspirin or arthritis drugs. This bacteria has a twisted spiral shape that attaches to and infects the mucous layer lining of the stomach. This infection produces an inflammation in the stomach wall called gastritis. The body even develops a protein antibody in the blood against it. The bacteria is probably acquired from contaminated food or from a drinking glass. It invades only after H. pylori bacteria injures the protective mucous layer of the stomach.

Arthritis medications include ibuprofen (Advil), Feldene, Naprosyn, Voltaren, Indocin, Aleve, Lodine, and many others. As with aspirin, they can damage the mucous layer of the stomach, after which the stomach acid causes the final injury.

So, H. pylori and certain drugs are the two major factors that cause ulcers. In rare cases, a patient will produce very large amounts of acid and develop ulcers. This condition is called Zollinger -Ellison syndrome. Finally, some people get ulcers for unknown reasons.

Ulcers cause gnawing, burning pain in the upper abdomen. These symptoms frequently occur several hours following a meal, after the food leaves the stomach but while acid production is still high. The burning sensation can occur during the night and be so extreme as to wake the patient. Instead of pain, some patients experience intense hunger or bloating. Antacids and milk usually give temporary relief. Other patients have no pain but have black stools, indicating that the ulcer is bleeding. Bleeding is a very serious complication of ulcers. 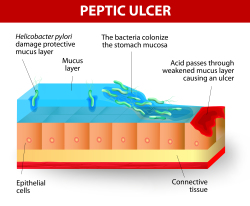 A diagnosis of peptic ulcers can be suspected from the patient’s medical history. However, the diagnosis should always be confirmed either by an upper intestinal endoscopy, which allows direct examination of the ulcer or by a barium x-ray of the stomach. Rarely an ulcer can be malignant. With endoscopy, a biopsy specimen can be obtained to determine if this is so.

Therapy of PUD is fairly straightforward. There are now available very effective medications to supress and almost eliminate the outpouring of stomach acid. These acid-suppressing drugs have been dramatically effective in relieving symptoms and allowing ulcers to heal. If an ulcer has been caused by aspirin or an arthritis drug, then no subsequent treatment is usually needed. Avoiding these latter drugs, should prevent ulcer recurrence.

An important understanding in PUD treatment was the discovery of the H. pylori infection. When this infection is treated with antibiotics, the infection, and the ulcer, do not usually come back. Increasingly, physicians are not just suppressing the ulcer with acid-reducing drugs, but they are also curing the underlying ulcer problem by getting rid of the bacterial infection. If this infection is not treated, the ulcers invariably recur.

There are a number of antibiotic programs available to treat H. pylori and cure ulcers. Working with the patient, the physician will select the best treatment program available.

What Else Can Be Done?

The factors discussed above have altered the approach to ulcers in a dramatic way. Still, other factors are important:

Both of these stimulate the secretion of stomach acid and should be avoided in the acute phase of an ulcer.

Nicotine will delay the healing of an ulcer. There are many good reasons to stop cigarette smoking. Healing an ulcer is one of them.

These agents, purchased over the counter, can be used for relief of peptic ulcer symptoms. Except for bismuth (Pepto Bismol),which actually is used as one of the treatment programs, they do not help heal ulcers.

In the past, stress and emotion were felt to be a major cause of ulcers. Now it is known that, by itself, stress rarely causes an ulcer although it probably can aggravate the symptoms.

Surgery used to be a major form of ulcer treatment. Now, it is the exceptional patient who needs surgery for an ulcer complication such as perforation or obstruction. Uncontrolled hemorrhaging can also be treated by radiologists by occluding the bleeding vessel.