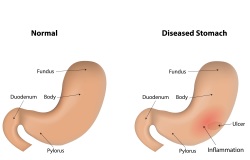 The stomach, as everyone knows from watching TV ads, is J-shaped and collects swallowed food and liquid. It then methodically grinds the food into small pieces and squirts it out in tiny jets of fluid into the duodenum which is the first portion of the small intestine.

There are several types of cells lining the stomach. One produces hydrochloric acid and another, pepsin, a digestive hormone. Along with the grinding motion of the stomach, these chemicals break down the food and prepare it for digestion and absorption.

Gastritis means inflammation of the stomach. It means that white blood cells move into the wall of the stomach as a response to some type of injury. Gastritis does not mean that there is an ulcer or cancer. It is simply inflammation–either acute or chronic. What are the causes of gastritis?

This is the name of a bacteria that has learned to live in the thick mucous lining of the stomach. Although it doesn’t actually infect the underlying tissue, it does result in acute and chronic inflammation. It probably occurs early in childhood and remains throughout life unless antibiotics cure it. The infection can lead to ulcers and, in later life, even to stomach cancer in some people. Fortunately, there are now ways to make the diagnosis and treat this disorder.

The immune system makes antibodies and other proteins that fight off infection and keep the body healthy. In some disorders, the body mistakenly targets one of its own organs as a foreign protein or infection. It makes antibodies against it and can severely damage the organ. Diseases such as lupus, hypothyroidism, rheumatoid arthritis and the type of diabetes that requires insulin, are examples. The stomach lining also may be attacked by the immune system leading to loss of the stomach cells. This causes acute and chronic inflammation which can result in a condition called pernicious anemia. The anemia occurs because the body no longer can absorb vitamin B12 due to a lack of a key stomach factor, destroyed by the chronic inflammation. Stomach cancer can even occur later in life.  People with pernicious anemia need regular vitamin B12 supplementation.

NSAID stands for non-steroidal anti-inflammatory drug. These are arthritis and pain relievers and include the over-the-counter drugs including ibuprofen products such as Advil and Motrin and Naproxen products such as Aleve. Some prescription NSAIDs include Celebrex, Mobic and Indomethacin. Along with aspirin, NSAIDs reduce a protective substance in the stomach called prostaglandin. These drugs usually cause no problems when taken for the short-term. However, regular use can lead to a gastritis as well as a more serious ulcer condition.

Alcohol and certain other chemicals can cause inflammation and injury to the stomach. This is strictly dose related in that a lot of alcohol is usually needed to cause gastritis. Social or occasional alcohol use is not damaging to the stomach although alcohol does stimulate the stomach to make acid.

At times, the folds in the stomach will become enlarged and swollen along with the inflammation. There is not a great deal known about why this occurs. A variation of this type of gastritis is called Ménétrier’s disease where the gastric folds become gigantic. With this condition, there is often protein loss into the stomach from these weeping folds.

There are other but rarer types of gastritis such as eosinophilic, phlegmonous (a severe bacterial infection) and granulomatous gastritis.

The symptoms of gastritis depend on how acute it is and how long it has been present. In the acute phase, there may be pain or gnawing in the upper abdomen as well as nausea and vomiting. Sometimes small amounts of food bring brief relief by buffering the stomach acid. In the chronic phase, the pain may be dull and there may be loss of appetite with a feeling of fullness after several bites of food. Very often, there are no symptoms at all. If the pain is severe, there may be an ulcer as well as gastritis.

The physician may suspect gastritis by listening to the medical history. However, the only certain way to make the diagnosis is by endoscopy and biopsy of the stomach lining. Endoscopy is an exam where, under mild sedation, a lighted flexible scope is passed into the stomach. Pictures can be taken but, more importantly, biopsies can be obtained for analysis under the microscope. An upper GI x-ray exam and certain blood studies may also be helpful.

The treatment of gastritis will depend on its cause. For most types of gastritis, reduction of stomach acid by medication is often helpful. Beyond that, a specific diagnosis needs to be made. Antibiotics are used for infection. Elimination of aspirin, NSAIDs or alcohol is indicated when one of these is the problem. For the more unusual types of gastritis, other treatments may be needed. Gastritis by itself is rarely a serious problem.

The cause of most types of gastritis is known and effective treatment and preventive measures are available so that serious complications are unusual. One exception is the H. pylori infection which, when present for a long time, may lead to stomach cancer in some individuals. This infection can also lead to a malignancy of the lymph system called a lymphoma. One such low-grade lymphoma is called a MALT lymphoma. Eliminating the infection from the stomach often cures this type of lymphoma.

The causes of gastritis are varied. The symptoms can be acute and severe or chronic, low-grade or even absent. The diagnosis is usually easily made by endoscopy. In most instances, effective treatment is available and serious complications are unusual. By working with the physician, a good outcome usually occurs.