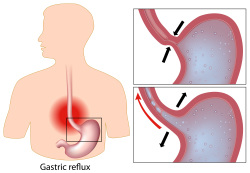 Everyone has heartburn occasionally. This occurs when stomach acid flows upward (regurgitates) into the esophagus. The esophagus is the tube that carries food to the stomach. People usually feel heartburn as a burning sensation or pain behind the breastbone. Often, regurgitation of bitter-tasting stomach acid accompanies heartburn. An antacid or milk temporarily relieves heartburn for most people.

Why Does Heartburn Occur?

To understand heartburn, let’s look at the body’s anatomy. The esophagus carries food and liquid to the stomach. A sphincter (specialized muscle) is located at the end of the esophagus. It is known as the lower esophageal sphincter (LES). This muscle contracts in the same way as the anus does to close the opening of the rectum to the outside of the body. The LES muscle should only open when food or liquid is passed into the stomach, otherwise it should remain shut.

However, the LES muscle does not always work perfectly. Sometimes it is too weak to stay completely closed, and stomach juices seep back into the esophagus. This is known as reflux. There are certain factors that contribute to reflux. The most common is eating a large meal. Along with swallowed air, a large meal causes pressure in the stomach to rise, and overpowers the LES muscle. The following are other factors that reduce the LES pressure and allow reflux:

Heartburn and reflux are extremely common, with 10 percent of the population experiencing it daily. Twenty-five percent of pregnant women have heartburn. Even though heartburn is common, it is rarely life threatening. Severe cases, however, can result in injury to the lower esophagus that requires treatment.

What Is a Hiatus Hernia?

There are various tests used to diagnose reflux:

In some people, acid in the lower esophagus actually causes tissue damage. Certain complications can then result:

There are general measures the patient can take to reduce reflux:

These can be used often. Generally, antacids should be taken 30 to 60 minutes after eating and at bedtime. Liquids are preferred to tablets, with the strongest being Maalox II, Mylanta II, Gelusil II and Riopan Plus.

Medicines are now available that effectively reduce and even eliminate the secretion of stomach acid and increase the strength of the LES muscle. The most potent of these are called proton pump inhibitors. These remarkable drugs are often dramatically effective in severe cases of reflux.

Surgery is rarely required in treating reflux. However, when the treatment programs outlined above are ineffective, surgery may be considered to strengthen the LES muscle. An anti-reflux surgery is usually performed by laparoscopic technique. This surgery is accomplished through tiny holes in the belly button and upper abdomen. Recovery is far quicker with this technique. This operation should only be performed by surgeons thoroughly familiar with it. Surgery, however, is not always permanently successful and there can be complications.

Heartburn occurs so commonly that it is normal for everyone to experience it at some time. However, when heartburn is persistent, it needs to be evaluated, and long-term follow-up care is often required. Medical treatment is usually very effective and can prevent complications. For the few patients who are not helped by medical treatment, surgery offers a viable and usually successful alternative.