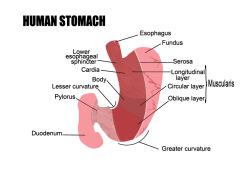 This tough looking word, pronounced gas-tro-par-EES-is, is simple enough in its meaning. Gastro means stomach. Paresis means weakness. Gastroparesis is a weak stomach. This condition is very common. It can be the cause of a number of abdominal complaints. While symptoms range from mild to severe, it is usually not a serious problem and there are effective treatments available.

How the Stomach Works

To understand gastroparesis, you first must understand how the stomach functions. The stomach has two parts. The upper portion is called the fundus which is where swallowed food and liquid collect. The lower portion is called the antrum. This is the stomach grinder. It is where food is churned back and forth until it is broken into small fragments after which it passes into the duodenum, the first part of the small intestine.

It may be a surprise to think of the stomach as being similar to the heart, yet this is really true. Both have an area within them called the pacemaker. This is where an electrical wave originates and then sweeps across the organ. The electrical wave causes the muscles in the heart and stomach to contract. In the stomach, the pacemaker is in the upper portion. The wave sweeps down across the antrum causing it to contract, grind up food, and expel small amounts into the duodenum, the first part of the small bowel. The normal rate of contraction is about three times a minute, much slower than the heart, but quite adequate for the job.

Gastroparesis occurs when the rate of the electrical or muscular contraction waves slow and the stomach contracts less frequently. Now the food just lays in the stomach relying on acid and digestive enzymes to break down the food and on gravity to empty the stomach. There are a number of causes for this condition:

The usual symptoms of gastroparesis are a feeling of fullness after only a few bites of food, bloating, excessive belching, and nausea. At times there will be a vague, nagging ache in the upper abdomen but usually the pain is not sharp or crampy as might occur with ulcers or a gallbladder attack. There may be vomiting, heartburn, or regurgitation of stomach fluid into the mouth. Medications that reduce or eliminate stomach acid usually don’t help much.

The diagnosis of gastroparesis starts with the medical history where the physician may suspect the diagnosis based on the symptoms. In severe cases, the physical exam and blood tests may show evidence of malnutrition, but usually the exam is normal.

Upper endoscopy is a visual exam of the stomach using a lighted flexible tube. Mild sedation is usually given for this procedure. This exam should always be done to be certain there is not a blockage in the stomach.

A gastric or stomach emptying test is presently the best method of making the diagnosis. In this test, a food, such as scrambled eggs, is labeled with a marker which can be seen by a scanner. Following ingestion, the scanner tracks the time it takes for the food to leave the stomach. In general, less than 10% of the stomach contents should remain after 4 hours. A final test, which is not widely available, is the electrogastrogram (EGG). This test, like the EKG on the heart, measures the electrical waves that normally sweep over the stomach and precede each contraction.

First, if there is an underlying disorder, it needs to be treated effectively. Examples are good blood sugar control in the diabetic patient or thyroid medicine for someone with an underactive thyroid.

Second, there may be a need to address diet and nutrition. When gastroparesis is mild, there are usually few food problems. However, if there is a marked delay in stomach emptying, then attention to the diet is necessary. Fats, including vegetable oils, normally cause delay in emptying of the stomach, so foods that are high in fat need to be avoided. High fiber foods such as broccoli and cabbage tend to stay in the stomach, so these foods should be restricted when symptoms are severe. Liquids always leave the stomach faster than solid food so liquid type foods such as low-fat shakes should be used. Finally, frequent small meals, 4-6 times a day, are usually more effective than larger meals, 2 or 3 times a day. A registered dietitian can be very helpful in providing advice in severe cases.

The third treatment is medications.

This is an effective drug although it may have side effects such as restlessness, fatigue, agitation and depression. The dose is 5-20 mg. This drug is available in generic form. This medication has a Black Box warning to alert physicians and patients to a serious and potentially permanent side effect, tardive dyskinesia, a movement disorder.

This drug is available in Canada and Europe but not in the U.S. as of July 2018.

This drug and erythromycin, an old antibiotic, are occasionally used but generally are not effective for long term use.

Before Bo-Tox became popular for cosmetic purposes, it was used for certain medical conditions.  Bo-Tox has been used for gastroparesis with variable success.

Gastroparesis is a fairly frequent medical problem. While causing distressing symptoms in some patients, it rarely causes serious medical problems. The diagnosis is now straightforward. Treatment consists of treating any underlying problem, diet and medications. By working with the physician, most patients are able to reach a satisfactory treatment program.