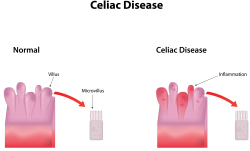 Celiac Disease (CD) is a disease of the lining of the small intestine. This part of the bowel lies between the stomach and colon or large bowel. It is about 20 feet long and is where nutrients, calories, vitamins and minerals are absorbed into the blood. The inside lining of the small bowel has tiny, microscopic, finger-like projections called villi. It is through these villi that nutrients are absorbed.

CD is a genetic disorder meaning that it can be passed through the genes from parent to child. It only occurs when the grain protein called gluten comes in contact with these villi. Gluten is present in wheat and all wheat products, barley, rye and, to a lesser extent, oats, at least in the initial diet adjustment. In celiac sprue, the gluten protein severely damages these delicate villi. In fact, the damaged villi are actually destroyed so that absorption of nutrients may be severely affected.

CD tends to be most common in people of northern European heritage. It can occur in infants or those of older ages. The body’s immune and antibody systems are, in some as yet undefined way, important. Certain protein antibodies occur in the blood of patients and even their close relatives. CD is also known as celiac disease, non-tropical sprue and gluten enteropathy.

What are the Symptoms?

In children, there may be irritability, diarrhea, nausea, vomiting and failure to thrive or grow. The same symptoms may occur in adults along with abdominal pain, weight loss, anemia or low red blood cell count, mood changes, joint and muscle pain, fatigue, skin rashes and menstrual irregularity. Remarkably, some people may have no symptoms at all. Even with the damage to the small bowel, they seem to absorb enough nutrients to remain reasonably healthy.

The physician may suspect the disorder by the medical history and abnormal blood tests such as a low red blood cell count.  There are a variety of blood tests available to screen for celiac sprue.  These can be broken down into two categories:  antibody test and genetic test.  The most common antibody tests are antigliadin antibodies IgA and IgG and tissue transglutaminase (t TG).  The genetic test is called HLA DQ2 and HLA DQ8.  It is important to understand that these tests primarily screen for celiac sprue and do not confirm the diagnosis.  A biopsy of the lining of the small intestine is always needed. This is done by endoscopy, where, under light sedation, a thin endoscope is passed through the mouth and into the small bowel where biopsies can be taken. When damage to the inside lining of the bowel is seen, the diagnosis is usually confirmed.

The treatment of CD is simple yet difficult. CD is treated through dietary modification – avoid the gluten protein. This is, however, easier said than done.

Wheat, rye, barley and perhaps oats are the culprits. These grains, especially wheat, are part of almost every meal. They are present in many canned and prepared foods. The patient must become a label-reader to see if wheat in any form has been used. Further, the patient, and especially, the preparer of the patient’s food, must understand the treatment goals. Instead of wheat flour, potato, rice, soy or even bean flour may be used. Specialty stores (and many grocery stores) now sell gluten free breads, pasta and other gluten-free products. Meat, fish, poultry, fruits and vegetables do not contain gluten and are good choices.

Patients with CD and their food preparer should see a registered dietician for several sessions to learn more about this complicated diet. Another source of information is the Internet where there are many support groups and forums, as well as professional organizations that provide good information about this disease (see Support Links section).

Eating out can be a challenge, as sauces and gravies are often made with wheat-based products. However, once known and understood, the diet can be fairly easy to follow, especially when a patient sees improvement in their condition after dietary changes are undertaken.

Most patients have a good response to the elimination of gluten from their diet. A few are called non-responders and do not respond. Further testing and medications may then be indicated.

Celiac Disease and Other Disorders

Since CD is a disorder of the immune system and the genes, it is not surprising to find that it is associated with other diseases that have similar links.

There are certain complications known to develop with CD. Usually, these can be prevented by staying on a strict gluten-free diet.

Celiac Disease is a disorder which can be difficult to diagnose because of the many different symptoms it may produce. It can occur at almost any age. Making the diagnosis is fairly straightforward. The treatment of avoiding gluten protein in wheat, barley, rye and perhaps oats is the difficult part. However, once mastered, it becomes a fairly easy diet to follow. Further, the response to dietary treatment is usually so good that patients have no problem staying on this eating program.

Patients with Celiac Disease can receive support and information about their disease through the following contacts: