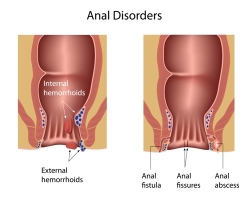 Hemorrhoids, or piles, are one of mankind’s most common and nagging disorders. By themselves, hemorrhoids are rarely serious, but they can be extremely troublesome. In some instances, they may mask a more serious disorder, such as colon or rectal cancer. Therefore, hemorrhoids require the proper diagnosis and treatment by a physician.

Hemorrhoids are dilated (enlarged) veins which occur in and around the anus and rectum. They may be external (outside the anus) or internal and slip to the outside. In both of these instances, the hemorrhoids can be felt and seen as lumps or knots. Hemorrhoids also may remain inside the rectum and so cannot be felt or seen. These are called internal hemorrhoids.

What Are the Complications?

Thrombosis and pain — A blood clot in the hemorrhoid may cause severe pain and usually demands immediate medical attention.

Bleeding — Hemorrhoids can ooze fresh red blood, whether located externally or internally. External hemorrhoids often cause dripping of blood from the anus while sitting on the toilet. The blood might also be seen as soiling of the underwear. Internal hemorrhoids that bleed may produce fresh blood in the stool.

Itching and irritation — External hemorrhoids can be itchy, especially if the area is moist and irritated.

Do Hemorrhoids Cause Cancer?

Hemorrhoids do not develop into cancer. However, both hemorrhoids and cancer can cause rectal bleeding. In fact, many disorders can be the cause of rectal bleeding. When rectal bleeding occurs in persons over age 30, and especially in those over age 50, it should be considered a serious problem until an exact diagnosis is made. The physician who directly examines the rectal area can often make the specific diagnosis.

Treatment of hemorrhoids varies depending on where they are, what problems they are causing, and how serious they are. Often, time and the normal process of healing clear hemorrhoids with little or no specific treatment. When hemorrhoids require treatment, the following general measures are recommended:

A common method of treating internal hemorrhoids is to use a small rubber band to tie off the base of the swollen vein. The blood circulation stops and the hemorrhoid then falls off. Repeat treatments are sometimes necessary.

An infrared light source can be used to coagulate internal hemorrhoidal veins. Often, more than one treatment is necessary.

A laser directs a high-intensity light beam at tissue and so produces heat, thereby coagulating or cauterizing the hemorrhoid. This technique is still somewhat new, but may have application in the future.

Surgery is sometimes recommended in treating hemorrhoids. It usually is reserved for:

The physician evaluates each patient’s case to determine the appropriate treatment.

Hemorrhoids are an especially common disorder and often clear up by themselves or with minimal treatment. Treatment typically is simple and effective, although surgery occasionally is necessary. Hemorrhoids can mask a more serious disorder and, therefore, must be evaluated and diagnosed properly by a physician. People with hemorrhoids who work closely with their physician are usually assured a good outcome and relief from this common disorder.