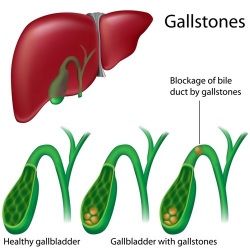 How Do Gallstones Form?

Bile is composed of a variety of chemicals, including cholesterol, salts, and certain pigments. The gallbladder absorbs water from the bile, causing it to thicken. In some people, tiny crystals form from the cholesterol and pigments from the more concentrated gallbladder bile. These crystals gradually grow until one or even hundreds of gallstones develop. About 80 percent of gallstones are composed of cholesterol, while the remainder are made of pigments, salts, and other chemicals.

It is well known that in the Western world middle-aged, white females are most likely to develop gallstones. Pregnancy also increases gallstone growth. However, by age 60, 15-20 percent of all men and women have gallstones. Losing weight very rapidly produces stones in some people. Certain medications including oral contraceptives may cause gallstones to form. Asian and African people have a low incidence of gallstones, while certain American Indian tribes have almost a 100 percent incidence in females by middle age. Therefore, heredity, gender, age, pregnancy, medications, and diet are probably all important factors in developing gallstones. Practically anyone, at any age and under certain conditions, can develop these stones.

Many patients with gallstones never experience symptoms. However, as many as one-half of all gallstone patients eventually experience one of the following:

Colicky pain usually occurs after meals when the gallbladder contracts. During this process, gallstones can lodge in the outlet neck of the gallbladder or even in the main bile duct to the intestine. This situation causes intermittent, often severe pain, which is experienced in the upper-middle or right side of the upper abdomen, or even in the right shoulder and, sometimes, under the breast bone. Colic attacks last from a few minutes to several hours.

Occasionally, the stones irritate the gallbladder to such an extent that active and acute inflammation results. This condition produces steady, dull, and usually severe pain in the upper-right abdomen. This is known as acute cholecystitis. It is a serious condition.

When a gallstone becomes permanently lodged in the main bile duct, the bile flow is blocked and cannot reach the intestine. Therefore, bile backs up in the liver and spills into the blood. The skin turns yellow, the urine dark. The stool color may also become lighter due to lack of bile.

The physician, and even the patient, may suspect the presence of gallstones simply from the medical history. An ultrasound or sonography exam provides a simple, quick method of diagnosis. In this test, sound waves are beamed into the gallbladder. This test looks at the anatomy of the gallbladder. Another way of testing is to evaluate its function. In this test (a hepatobiliary scan, also abbreviated HIDA or PIPDA) a small amount of radioactive material is injected by vein (IV). It then concentrates in the gallbladder. An agent is then given by IV that will cause the gallbladder to contract and empty. A diseased gallbladder does not do this very well and so this test can indicate a gallbladder problem.

Because many patients with gallstones never develop symptoms, watchful waiting is often indicated. In fact, it is usually recommended that patients without symptoms receive no treatment. When treatment is needed, it usually involves one of the following:

This technique, (laparoscopic cholecystectomy) has rapidly become the treatment of choice for many gallstone patients. A tiny incision is made through the navel. A microvideo tube is then inserted through it. Three other small instruments are then inserted through the upper abdomen. These are used to pick up and dissect the gallbladder which, together with the stones, is teased out of the small incision. With this technique, patients can usually go home the same or next day.

In the past, general surgery, (open cholecystectomy) was the treatment of choice for symptomatic gallstones. Laparoscopic surgery is now possible in most patients. With general surgery there is a 3 to 6 inch incision in the right upper abdomen and a 3 to 6 day hospital stay. There are instances in which this type of surgery is still necessary.

If a gallbladder becomes acutely inflamed and the person is at high risk for surgery, then a drainage tube can be placed into the gallbladder. This is usually a temporary solution.

Because of the speed and simplicity of laparoscopic surgery, this technique is by far the one most commonly used. The body can function quite well without the gallbladder. Many patients will experience diarrhea. For most, the diarrhea self-resolves by six months.

There is now enough known about gallstones that certain recommendations can be made about how to prevent them in the first place. Some of this knowledge is pretty firm while some is only suggestive at this time.

Achieve and maintain ideal body weight but do not lose more than 3 lbs per week, especially using the super low-calorie liquid fasting diets.

Increased fiber in the diet, vitamin C (no more than 500 mg a day) and caffeinated coffee, cholesterol-lowering medications (known as statins), and a diet high in vegetable proteins and mono and polyunsaturated fats may all be helpful. Additionally, regular recreational and physical activity – vigorous walking, gardening, aerobics – seem to have protective value.

Gallstones are a common disorder and often cause no symptoms. However, they can produce severe pain and serious problems which, when discovered, require a well-developed plan of action. The goal should be to avoid emergency surgery and complications.  For symptomatic stones, laparoscopic surgery is most commonly performed.  By consulting with your physician, the right treatment choice can be made.