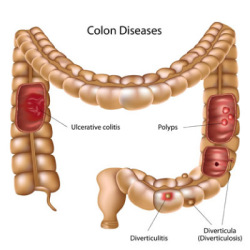 Cancer of the colon is a major health problem in the United States. It ranks as a leading form of cancer, along with lung and breast cancer. Importantly, colon cancer is also one of the most curable forms of cancer. When detected early, more than 90 percent of patients can be cured. More importantly, it is also a preventable cancer.

This disease begins in the cells that line the colon. There now is strong medical evidence that there are abnormal genes for colon polyps and cancer that can be passed from parent to child. The genes within each cell are the hereditary structures that tell the cell what it should do. When these controlling genes are absent there is a tendency to grow polyps. The cells in the polyp eventually become uncontrolled and turn into a cancer. Colon cancer also can develop with other conditions, such as ulcerative colitis, a chronic inflammation in the colon.

What is a Colon Polyp?

A polyp is a growth that occurs in the colon and other organs. These growths, or fleshy tumors, are shaped like a mushroom or a dome-like button, and occur on the inside lining of the colon. They may be as small as a tiny pea or larger than a plum. Colon polyps start out as benign tumors but in time may become malignant. The larger the polyp, the more likely it is to contain cancer cells.

Why do Colon Polyps/Cancer Form?

A great deal is known about why and how polyps form. In some people heredity and genes are the most important factors. In others, heredity may be necessary but diet and foods may also be very important.

With certain family histories only the physician can properly advise you. In some families the genetic disorder is so strong that it is the only thing that matters. Hereditary Familial Polyposis and Lynch Syndrome (see below) are two disorders that are clearly linked to genes alone. For the vast majority of polyps, dietary and genetic influences may be of equal importance. The data is not entirely clear but the medical evidence strongly suggests this.

There are literally thousands of chemicals and substances in the foods we eat. Each person eats different types and amounts of food, so doing medical studies to determine which are important is difficult. Nevertheless, certain substances have been found to be important.

A free radical is a natural byproduct of normal metabolism. These free radicals may cause damage within the body. Fruits and vegetables have great quantities of antioxidants, chemicals that neutralize the free radicals. Animal foods do not contain antioxidants. People who eat diets rich in fruits and vegetables seem to have a lower incidence of many cancers including colon cancer. The recommendation is to eat five portions of colorful fruits and/or vegetables each day. Vitamin C, E and beta-carotene supplements have not been shown to prevent any cancer.

Calcium is some way regulates the growth of the cells that line the inside of the colon. This may be why medical studies have shown that people who get 1,000-1,500 mg of calcium a day in their diet have less colon cancer. This level of calcium (from milk, dairy products, vegetables or supplements) is currently recommended for healthy bones. It may also benefit the colon.

Saturated fat may be broken down in the body to carcinogens which, at least in animals, can lead to colon cancer. Saturated fat is found in many prepared foods such as pastries and sauces and in meats. A significant reduction in saturated fat intake is recommended for many health benefits.

Studies years ago did relate a very high fiber diet in rural Africans to reduced intestinal problems such as diverticulosis and colon cancer. A recent analysis of the eating habits of over 100,000 American nurses showed that fiber, up to 25 grams a day, by itself, was not protective against this cancer. However, most fruits and vegetables are high in fiber and also contain beneficial chemicals to include antioxidants.

In summary, diets high in fruits, vegetables and calcium and low in saturated fats and meats offer the best protection against colon cancer and many other cancers.

Enough is now known about polyps that physicians generally place patients in one of three categories. In each of these the end result is an adenoma type polyp:

The key to early detection of colon polyps and cancer is the concern and willingness of each person to seek medical attention from a physician. The physician generally may perform the following:

Since your genes cannot be changed, if there is a family history of colon polyps or cancer, a colonoscopy should be performed to remove any polyps before they become malignant. Calcium and aspirin may have a protective role. Ask your physician about taking a calcium supplement and/or aspirin. While dietary fiber and regular exercise are not clearly protective, they play a real role in promoting long-term good health.

Cancer of the colon is a serious but readily detected malignancy. Early detection promises a particularly high chance of survival. Most colon cancers start as polyps, which can usually be removed through a colonoscopic exam. Today, there is much that can be done to prevent and cure this cancer. The essential first step involves action by the patient.

Jackson Siegelbaum Gastroenterology is currently participating in clinical trials for this condition. You may be eligible to participate.